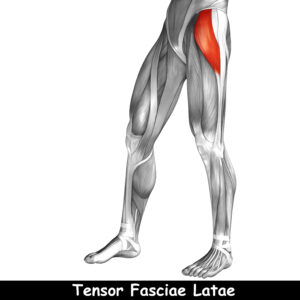 Tensor Fasciae Latae (TFL) part 3 of the grumbly muscle series…
TFL is an interesting and multifaceted muscle in my opinion.
Anatomy
TFL sits on the side of the hip bone (Iliac crest) just up from and behind the sticky out bits that you can feel at the front (ASIS). Along with fibres from Gluteus maximus, it then inserts into the IT (iliotibial) band which is a thick piece of fascia that runs down the outside of the thigh, interacts with the retinaculum (fascia) of the kneecap (Patella) and finally ends its journey inserting onto the head of fibula (the bone which sits on the outside of the tibia) and Gerdy’s tubercle on the tibia. It’s about 15cm long before it inserts into the IT band.
What does the TFL do?
• Medially rotates the hip joint.
• It assists in flexing the hip joint.
• And it (weakly) abducts the hip joint (takes the leg away from the body at the hip joint).
• With its ‘IT band’ hat on, it assists with lateral rotation of the femur.
• While we’re walking it tilts the hip on the side that’s weight bearing so the non-weight bearing foot can swing through without hitting the ground.
Why then does this muscle cause a lot of problems?
When the main hip stabiliser and hip abductor, gluteus medius, fatigues, TFL (possibly due to its proximity with gluteus medius?) takes over to stabilise the hip during single stance (while we walk and run) though it has enough jobs to begin with.
Because it’s often engaged a lot more than it’s intended to be, it becomes tight, and when it gets tight, it shortens and pulls the IT band…bearing in mind the IT band attaches to the fascia on the outside of the kneecap, it can pull the kneecap off its runner if circumstances allow. Think of a sliding wardrobe door, that isn’t sliding on its runner properly, causing patellofemoral (anterior knee) pain.
I recall quite well when I was marathon training and the pain from this muscle was outstanding. I also found that it is possible, and highly beneficial, to release this muscle off…

What can we do to reduce pain?
I advocate putting a tennis ball (or something harder) at hip height and leaning into it for 30 seconds. You’ll know when you’re on the right spot! If you’re strengthening gluteus medius you must do this beforehand otherwise, you’ll aggravate TFL further and won’t activate Gluteus medius.